Today's theme in the still life class at KAGS was toys. It was a good thing so many toys were brought in for the class as we had thirteen people in the group and were able to have four different displays set up to accommodate all of them.

I chose to do a couple of pieces using the some of the different ducks and fish toys.

For the first one I drew one of the ducks and one of the fish. I painted in the background curtain with various shades of French ultramarine blue, Antwerp blue and cobalt blue. Then set it aside to dry while I sketched in the second drawing of a rubber duck and the same plush duck in reverse. 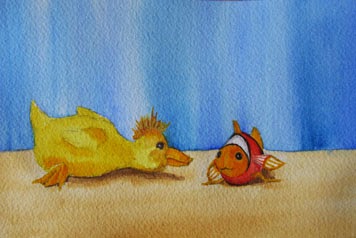 I then went back into the second painting and using French ultramarine blue and Antwerp blue painted in the floor and indicated the shadows beneath both toys. By then it was time to take a break so I set them aside to dry.

After break was over I started back on the first painting and placed a more defined shadow beneath both the fish and the duck. 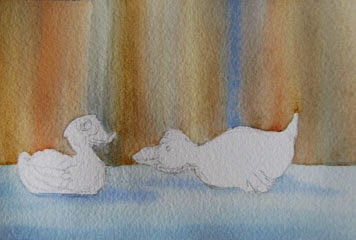 Then working back and forth between the two toys the eyes were put in and all the dark lines. A wash of aureoline was put over the entire duck as a base yellow and different areas were painted with raw sienna, new gamboge and cadmium yellow.

The fish was painted with alizarin crimson and cadmium red and in the lighter areas mixtures of new gamboge and cadmium yellow.

I will post these paintings at a later date once more on them has been completed.

Thank you to new collector Mrs. Julia Cameron of Peterborough, Ont. on her purchase of Poetry (see post on17 January 2012).