It is getting warmer with the temperature at -11F (-23.9C) and thankfully no wind to make it feel even colder, but the sun is shining which makes it easier to take.

I wanted to work on the three canvases and get them finished for the Small Treasures Show at the Kawartha Artists' Gallery and Studio next month.

This one needed about an hour of work to complete (see posts on 30 December 2014 and 28 January 2015) so I worked on it first and if I have time I will work on the others. 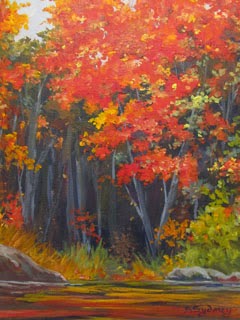 I started by giving more definition to the major mass of red and orange leaves and continued by adding a little burnt sienna to the colours and putting the dulled colour into the shadowed areas.

More details were added to the rocks and a few darks were put into the reflections in the water.

Here and there a few single leaves were added to give the impression that leaves were still falling off the trees.

I may do a few more paintings of trees in autumn at a later date.

Thank you to new collector Mr. John Taylor on his selection of Fallen Birches (see post on 09 September 2012).
Posted by S. Sydney at 7:38 AM No comments: