Today I set up my display at the Kawartha Arts Festival in Fenelon Falls, Ontario. 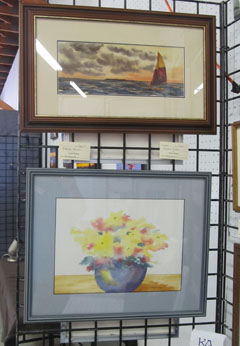 With encouragement from the Festival Organizer, Maud Skoog, this year I decided to enter a couple of my black and white graphite pencil sketches of nudes that I did in the Life Drawing classes at the Kawartha Artists" Gallery and Studio.

If you would like to see the images I will be hanging today for this show please follow the link to my Life Drawing Portfolio.

Unfortunately, I cannot show their images in this art blog as a few people do not understand that drawing and painting the nude human figure is an art form that has been around for centuries and feel it is pornography. 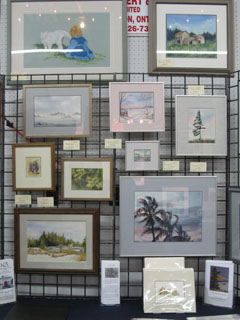 After bringing everything in from the car, the first thing I did was to put the two paintings which would be above the grids on the back wall.

Next the table was set up and covered; and then the grids were placed on top of the table.

Since I knew the two nudes would be placed on the front panel I hung them up first.

The three abstracts were put on the back panel on the far end and they were placed in position. 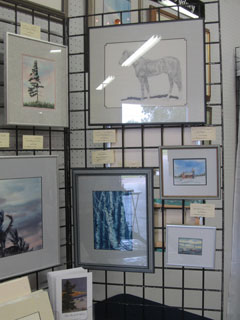 I hung up my name sign on the pegboard on the wall, and then after putting up the largest painting I placed three more pieces around it all having some red in them.

Now it was time to put the paintings in the grids in the centre of the table.

On the left side I placed two pieces with yellow tones.

On the right side I put a black and white drawing up first, followed by three smaller paintings with blue tones in them. 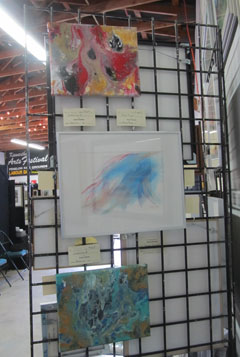 For the back two panels, I thought a mixture of blue and green colours, blending into pink and mauve to the right side and keeping the grey near the top of the left side blending down into the various shades of green and yellow tones.

All that remained to do was put the two binders of small originals on the table, followed by a few matted and shrink wrapped original paintings in one of the racks.

The final items were my biographies and promotional materials for some of the various art groups to which I belong. 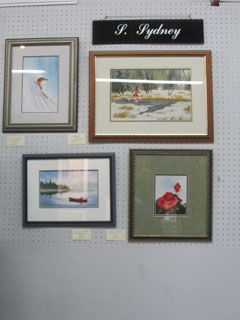 I hope you are able to come out and enjoy the show on one or both days. 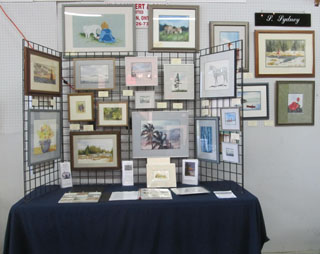 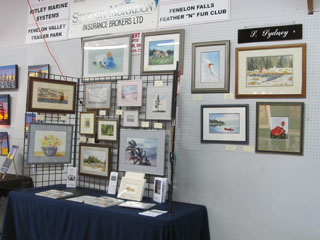