In less than three weeks it will be Christmas and I wanted to do a painting of snow falling on a pine tree forest.

I used masking fluid and splattered it across the paper and set it aside to dry.

Once it had dried I noticed that there was a large blob of masking fluid that was just too large to be a snowflake, so I removed it from the paper. 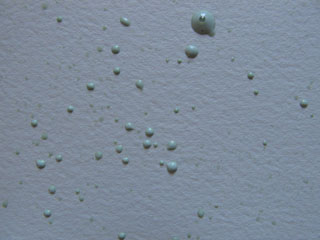 Using Antwerp blue, alizarin crimson and French ultramarine blue I brushed in the sky and added water to the sky colour to make it paler I brushed in some shadows onto the snow.

I added a little raw sienna to the sky colour and painted in the distant trees on the horizon.

Now it was time to paint in the trees. 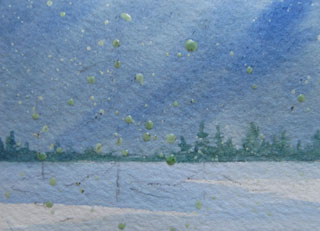 Using a mixture of French ultramarine blue and raw sienna the main branches were painted.

Burnt sienna was added to the green mi and some darker branches and needles were added.

After setting it aside to dry before I could remove the masking fluid I decided that the painting needed a few more trees. 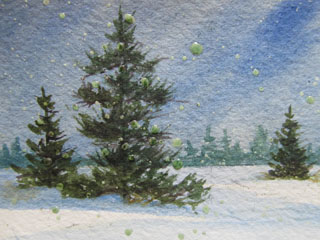 Using the same green mix and put in another large tree into the foreground, added two trees into the background on the left side and one more into the right side.

After it had dried I removed the masking from the painting to show the snowflakes. I added some growies into the base of the large trees using Antwerp blue and cadmium yellow. 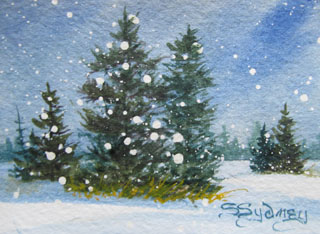