Today we went out in the pontoon boat on Lake Chemong.

As usual we went out into the lake and dropped anchor and had supper. Afterward we pulled up the anchor and let the current carry us back.

While Ron tried his luck at fishing, I worked on a few sketches of the lake and the landscape. 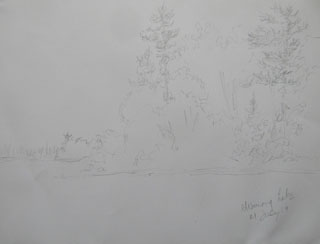 The first one was to be of a large cottage on a point of land, hidden in among the trees.

I had just finished the sketch of the island as Ron caught a sunfish, which I had to take off the hook. I decided that I would put in the cottage from my photographs at home later. 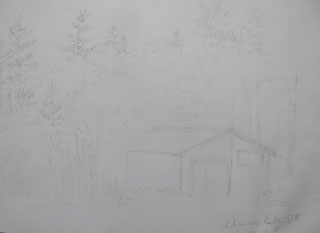 Ron started the motor and headed for a fishing spot closer to the boat launch, while I worked on my next sketch was of a large boathouse at the edge of the lake.

It wasn't long before he caught a small perch and with my sketch almost completed, he moved on to another place to try for a third fish. 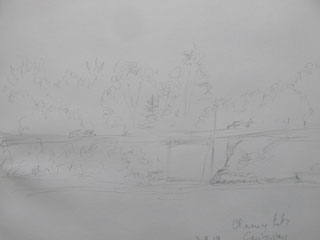 Unfortunately for Ron he had no luck on getting a third fish. I continued to work on a sketch of the causeway as he headed into the dock. On the whole it was an enjoyable evening on the lake.

I will post each of these sketches at a later date as more work on them is completed.
Posted by S. Sydney at 10:49 PM No comments: