Now that I have completed Tracker's head it is time to put the markings on Tassy. 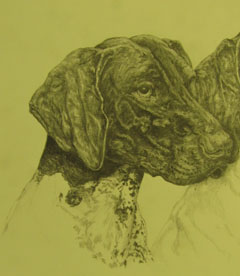 This is the time consuming part and a lot of care must be taken as it is very easy to get lost in the placement of the markings.

I started by lightly indicating the masses of freckles at the front of the neck and the direction of the hair whorls.

There was also an almost circular spot where the solid markings of the neck met the freckled mass which I put in as another marker. 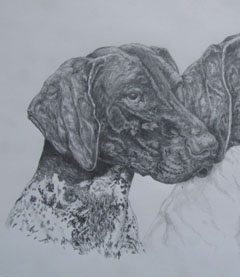 Gradually more of the freckles were put into the neck following the direction of the hair.

Care was taken to follow the size and shape of some of the larger spots on the neck and top of the shoulder.

Once the markings were finished I lightly added in a little shadow to the white areas to indicate the muscle mass in the shoulder.
Posted by S. Sydney at 3:27 PM No comments: