Today we went out on Coon Lake which is one of the many lakes in the Kawartha Highlands Signature Site Park. 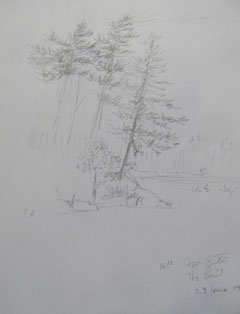 This will be the first time we are canoeing since 2016, as after breaking my femur in February of 2017 I was not able to get myself safely out of the canoe.

Even though it was overcast and they were calling for rain we wanted to try out the new canoe and see how it handles as compared to our old Kawartha canoe which was very stable.

It took a little while to get everything set up, but once we were ready we launched the canoe and paddled out into the lake.

It was fairly calm as we went up the lake and turned into the third inlet. 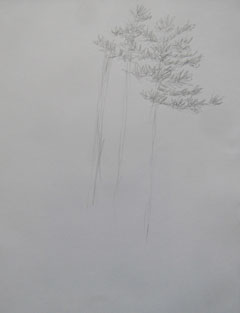 Ron got ready to fish, while I took out my sketchbook and pencils so I could draw some of the trees and rocks at the edge of the lake.

I got a fair amount sketched in of the three pine trees on the point before Ron caught his first fish.

It was a nice sunfish which I took off the hook and carefully released back into the lake.

In the meantime the canoe had shifted as the wind had started up and I started another sketch of another grouping of pines.

But before long he caught a second sunfish which I also released back into the lake. 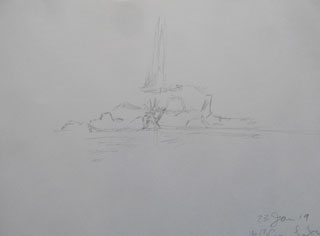 With the wind getting stronger and the storm clouds looming we decided to get closer to the landing.

We pulled into another inlet and Ron was in his glory as he caught seven nice bass, which I as usual took off the hook and released. 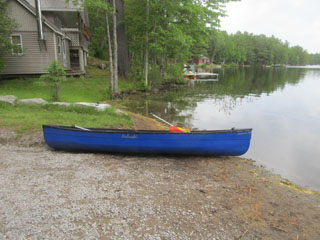 We moved to the inlet just before the landing and waited there as two kayaks and a small motor boat were ahead of us. I started on another sketch, but it wasn't long before Ron caught another four bass, but with his last cast he almost caught a huge bass.

It was coming to take the lure as Ron pulled it out of the water. To say he was disappointed is putting it mildly, but it was starting to rain and time to head in to shore.

We will just have to come back another day to try for the monster bass, since we know where he hangs out.
Posted by S. Sydney at 5:35 PM No comments: