Today I took four paintings to Art on Kent for the Members' Show which opens on 02 July and runs through to 01 August 2015 and sat the show at the Gallery for the afternoon. 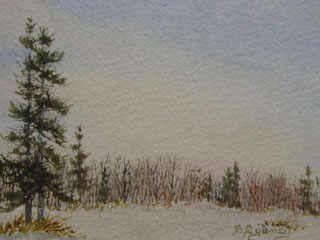 I worked on three winter paintings, the first one (see posts on 13 February and 24 November 2012) needed a few shadows in the snow to add a little more character from the solid area of white. 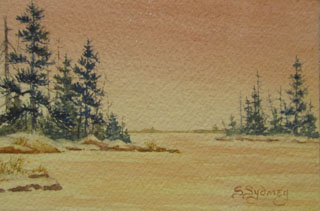 The second one (see posts on 14 December 2011 and 20 February 2013) had a large expanse of solid colour over the entire snow covered lake which was to plain.

I added a little pure burnt sienna over some areas of the lake to create a little more depth to the painting. 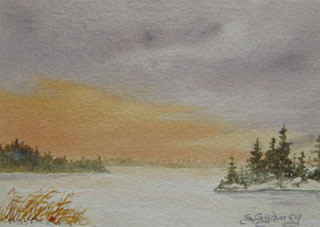 The third painting (see post on 18 November 2014) was an evening scene and the sunset colours would be reflected back in the snow.

A pale wash of burnt sienna was brushed in some areas of the snow to make it more believable.
Posted by S. Sydney at 12:27 AM No comments: