Old Barns in Winter - A Work in Progress

It is still not above the freezing mark at 24F (-4.4C) and with the wind chill making it feel like 6F (-14C), even though it will soon be spring it would be nice to have some of the snow melt, but that is not in the forecast. But I may as well enjoy the sunshine today because we are going to get more snow and freezing rain tomorrow.

In the afternoon I went to the second last Lucy Manley class for this session at KAGS where the subject was barns in winter. I chose to do a painting of my barns here on the farm.

The canvas was under painted with raw sienna and then blocked out with cadmium red. 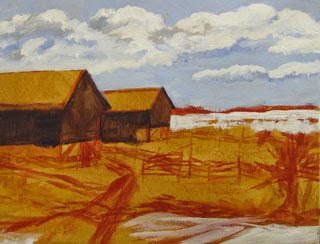 Using a mixture of French ultramarine blue and burnt sienna the dark barn board was painted in on the shadowed side of the barns.

A small amount of Titanium white and a touch of alizarin crimson were added to the barn board mix and the sunlit sides of the barn were added.

The clouds were painted in first with Titanium white and the bottom of the sky was painted in next using the white and cerulean blue. At this time a little of the snow in the far fields was indicated with white. 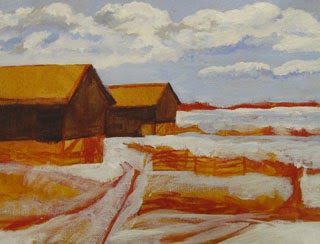 Then using a mixture of Titanium white, French ultramarine blue and a little cerulean blue the top of the sky above the clouds was painted.

More of the white was used to indicate the snow in the paddock and foreground fields. Some of the sky colours were used to paint the shadows in the snow. 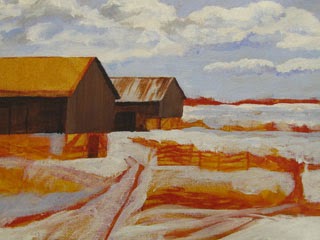 Using a very dark mix of French ultramarine blue and burnt sienna the shadows under the roof lines were indicated.

With a pale grey of Titanium white and a small amount of the shadow colour the far barn roof was painted. Then pure burnt sienna was used to indicate the rust on the roof. 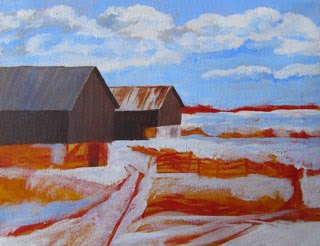 Adding more of the dark shadow colour to the grey of the far barn roof the closer barn roof was brushed in with a small amount of burnt sienna used to put a little rust on this roof.

I will post this painting at a later date one I have completed the stone work on the barns and some of the fence.

Thank you for looking at my artwork.
Posted by S. Sydney at 6:11 AM No comments: