Drawing the American Saddlebred - The Hindquarters

I will now start working on the hind quarters.

Once again establishing my shadowed area first in a mid tone and gradually working up the layers of graphite. 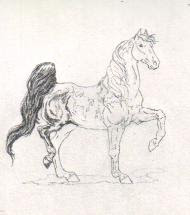 As I lay down the lines of graphite I follow the direction of the muscles and curve the lines, this gives the illusion of roundness, rather than using straight vertical lines which would make it appear flat.

Where the white stockings are on the leg I lightly indicate the outline and add the shading to the leg and joint to give shape and roundness, leaving the paper to remain white. 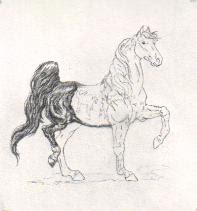 I will establish the dark shadow on the underbelly and finish the flap of skin in front of the stifle.

Before proceeding further now is a good time to remove any excess graphite from the paper and apply a layer of workable fixative. 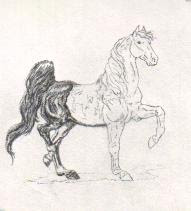 The far hind leg is completed in the same manner.

Once again the excess graphite is carefully removed and a layer of workable fixative is applied to the drawing. 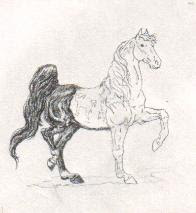 It is now time to proceed to completing the body of the horse.
Posted by S. Sydney at 4:16 PM No comments: