Through the Canyon I - A Work in Progress

Today I was watching a program on Utah's five National Parks which are associated with distinct geographical features. It showed Arches with its arches carved out of the sandstone by the elements, to Bryce Canyon with its hoodoos, Canyonlands which is divided into three different areas: Island in the Sky, The Needles and The Maze, Capitol Reef with its Waterpocket Fold and Zion with its many narrow canyons and towering walls. 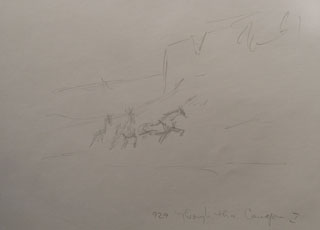 While it was on I started doing a few quick sketches of the canyons and rock cliffs. In this sketch I added a few horses.

I will post this drawing at a later date once more of the details have been added.

Thank you for coming to look at my artwork.
Posted by S. Sydney at 3:04 PM No comments: