This morning I was watching The Weather Network on television and they were showing a video of the surf crashing on shore and it made me think if this painting, that I had started last year (see post on 15 September 2013).

I started at the horizon line and gradually made the wave lines larger until I had a breaker starting to crest, then I put in the trough and the receding waves on the shore.

I scattered some seaweed across the beach that had been washed in by the waves. 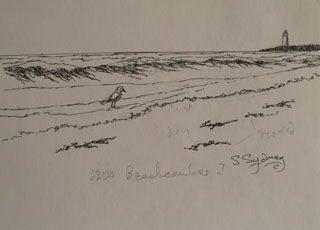 After looking at the drawing, while taking a break and having a cup of tea I decided that it needed a lighthouse on a spit of land.

The OSWOA shown here is an original pen and ink drawing using STAEDTLER Mars 308 Fineliner on 109lb. Pentalic Paper for Pens archival quality, acid free paper. It is priced at $30.00 and sold matted and shrink wrapped.
Posted by S. Sydney at 10:22 PM No comments: