Now I am going to finish the ear; working from the front edge of the ear leather back towards the first fold which is about the middle of the ear. 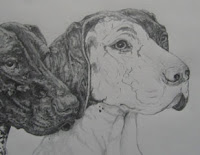 Working in the darkest areas first I gradually build up layers of graphite in the shadows and shading to give definition to the way the ear leather folds.

There will only one or two layers of graphite in the lightest areas.

Then I complete the back part of the ear in the same manner until the entire ear is complete.

I worked a little on the nostrils of the nose and put a little shading under them, but I am not happy with the placement and will need to rework that later. 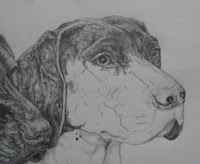 Going back up to the top of the skull I lightly filled in the area to join both side of the skull as a starting point to be sure the tone is the same value.

From there I once again started in the darkest area using for the most part lines bent in the direction the areas curve to help create the illusion of roundness.

Once I reach the eye orb I take care to define the shadow above the eyelid and to place the high light on the lid itself so it looks as though there is a depression behind the lid.
Posted by S. Sydney at 8:35 AM No comments: