First Snow - A Work in Progress

With the milder temperatures that are being called for the rest of the week I do not think we will have a white Christmas this year.

I decided that I would start on one of the three canvases I am donating for the Small Treasures Show from the 18-29 March 2015, which is a fund raiser for the Best of High School Art Show at KAGS. 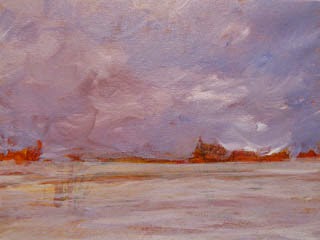 I under painted the canvas with raw sienna and using cadmium red blocked in the distant hill and the edge of the field as well as the two main trees in the foreground.

Using various mixtures of Titanium white, French ultramarine blue and alizarin crimson I painted in the sky first, then gradually added a little more white and painted the far hill and then the field.

I will post this painting at a later date once more work on the painting has been completed.
Posted by S. Sydney at 6:30 AM No comments: