Today I was in the mood to work on something different and since last night I was watching a program on television of the east coast, I thought I would do a couple of lighthouses from memory. 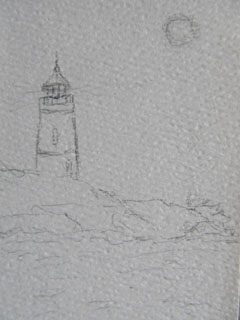 They probably won't look like any of the ones I saw last night but the basics of most lighthouses are similar.

For my first one I did it in a portrait format and placing the lighthouse on the left side of the paper.

Below the lighthouse I placed the rocks with the breakers crashing against them and waves racing toward the shore.

Lastly, I put a moon or a setting sun in the sky. If I was to do it as a painting that is a decision I would have to make or perhaps do one of each. 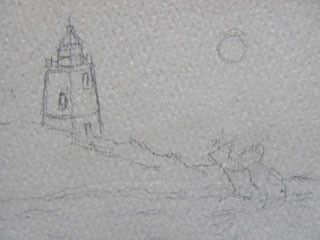 For my second one, I used the landscape format and instead of doing a cylinder shape for the lighthouse I used more of a pyramid shape.

Again, I put in the rock base, the breakers and in this case I think it should be a sunset should I do it as a painting.
Posted by S. Sydney at 8:09 PM No comments: