The roses had been masked out first to protect the whites. 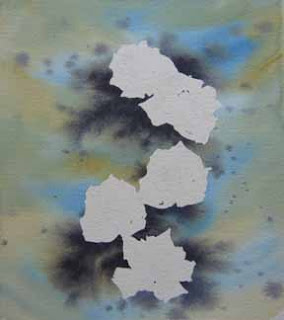 Various mixtures of Antwerp blue and French ultramarine blue and greens made by using the two blues and raw sienna were set in small containers.

A dark was mixed of French ultramarine blue, burnt sienna and alizarin crimson and set aside.

The paper was wet and the blue mixtures and green mixtures were poured over the entire background and rolled around. As the paper started to dry and there is more control over the paint the dark mixture was poured mainly around the flowers and then splattered over some areas.

The paintings were then set aside to allow the background to dry completely before the masking fluid was removed.

Using a wash of alizarin the roses that were going to be either pink or red had the first layers of colour applied. 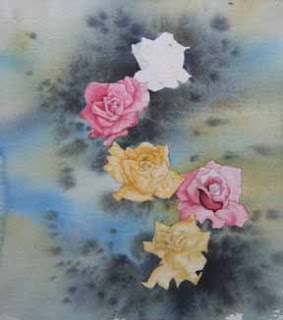 Raw sienna was used on the orange or yellow roses as a base layer.

On the white rose a pale wash of French ultramarine blue was used to indicate where the darkest shadow would fall across the petals of the rose.

Up to the first three layers of colour have been applied to some of the rose petals.
Posted by S. Sydney at 5:29 PM No comments: