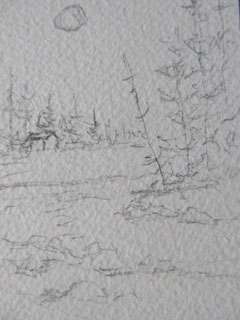 I wanted to work on a snow scene and I thought that one at night with a full moon in the sky would be a great idea.

As the drawing developed I had the moonlight reflected on the river and then added a small cottage nestled among a stand of pine trees.

I put some large pine trees on the right side.

Lastly I added some snow covered rocks into the foreground together with a few grasses and growies.
Posted by S. Sydney at 10:47 PM No comments: