The nice thing about today is that at least the severe cold is over for now and all I had was a few snow flurries as I went to Extendicare in Peterborough to take down my exhibit.

First I put in the large maple tree in front of the hay barn, followed by the hill and the fence line behind the barn. 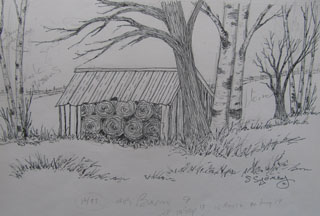 Next I worked on the hay barn, starting with the tin roof and followed by the barn boards on the building.

This was followed by putting in the large round hay bales being stored in the barn.