I am going to start on the other dog and get most of the head completed before I do the markings on the first one. 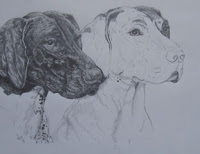 I like to start with the high lit edge of the ear and get a little shadow and shape under the top fold. Then mark in the lines for the folds on the ear leather and put in a little contrast to establish a difference from the bottom of the ear flap of the second dog from the profile of the first one.

Then  I added a little shading to indicate the brow lines over the eyes before moving on to the ear on the other side of the head.

Working over the top side of the skull to the center of the head and adding some shadows to create the illusion of a rounded shape.

The area around the far eye is given definition and shape, before working down to the chin and putting in a little shadow from the upper lip.

Since the second dog is mainly white in colour I put in the shadings on the body to indicate the muscle mass of the shoulder and some of the shadows in the throat. I also added the few markings the dog has on the neck. 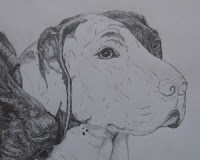 Next I finished the area above the far eye, adding more shading and details.

Then back to working on the ear I brought the shadow down the length of the front edge of the ear and gave some definition to the bottom of the cheek.

From there I added more shading at the bottom of the ear leather and defined the shadow behind the front edge of the ear.

I started adding shape to the fold on the ear leather, gradually adding dark against the highlights and creating the illusion of a third dimension in the painting.

I always find it a good idea to take a step back from the piece I am working on and look at the entire painting and make sure it is balanced.

Otherwise by being too focused on the small area I am working on it is easy to lose sight of the entire piece.

Thank you for coming to look at my artwork.
Posted by S. Sydney at 6:11 PM No comments: