Since Ron didn't have to go in to work today and the weather was nice, we decided that we would take the canoe and head up toward Bancroft so I could take some photographs of the autumn colours which are a lot further along than they are here. 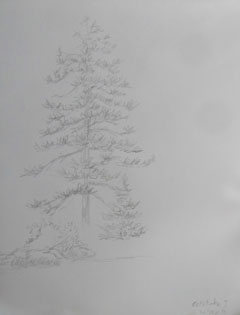 I thought that we would stop and go in to either Loon Call Lake or Wolf Lake, but Ron wanted to try a lake that we hadn't been to before so we ended up at Eel's Lake.

When we arrived, we could see that the water levels were down at least 2-1/2 - 3ft (.76 - .91m), which allowed many rocks, stumps and logs showing which would normally be submerged.

As usual we headed up the lake until we were as far as we wanted to go for the trip and turned the canoe around and I would work on drawings and take reference photographs while Ron went fishing.

I did a drawing of a large pine tree on an island which was at our turning point. 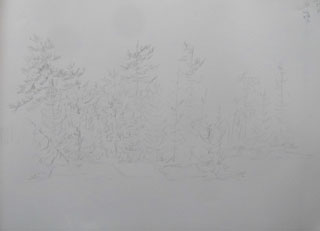 As we continued on our way back be went in between a chain of islands and the shore, both of which had cottages and boat docks.

My second drawing was of an island with a large number of pine, cedar and maple trees, which at a later date I may do a large painting in either watercolour or acrylic. 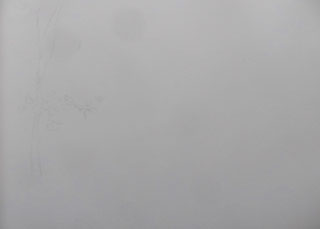 As we returned to the boat launch Rob decided he wanted to try one last time to catch a fish and we went into the shallow inlet on the far side of the dock.

Unfortunately for Ron, this trip the only thing he managed to catch was a couple of the sunken logs in the inlet. All in all it was an enjoyable day out on the lake.
Posted by S. Sydney at 10:30 PM No comments: