The Red Sleigh - A Work in Progress

There is snow on the ground which helps to make things look more like Christmas and my Basic Watercolour class at the Kawartha Artists' Gallery and Studio wanted to do a Christmas theme.

It was decided to do a horse and sleigh after they saw my graphite pencil drawing that I had started a couple of years ago (see posts on 05 and 21 August 2012).

I made copies of the sketch in four different sizes and had my students decide how large they wanted to make their painting.

After a little bit of discussion it was decided that the horse would be a Belgian, rather than a Clydesdale or a Percheron.

Leaving the mane, tail and white markings dry the rest of the horse's body was wet and a pale wash of raw sienna put over the entire horse. 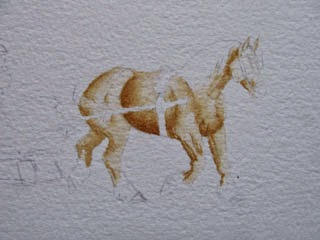 A little more raw sienna was added to the wash to darken it slightly and the darkest shadows were painted in and the edges softened slightly.

This process was repeated twice more to create the look of roundness on the barrel and to give some shape to the legs, chest and neck.

I will post this painting at a later date as more work is completed on the horse.

I would like to thank returning collector Mrs. Joanne Fernall of Norwood, Ontario on her selection of Battle Royale (see post on 01 August 2010).
Posted by S. Sydney at 8:20 AM No comments: