Gathering Storm - A Work in Progress

It is a milder day 24F (-4.4C) than what we had on the weekend and the snow that started yesterday afternoon continues to fall and is supposed to continue into tomorrow.

I started by indicating lightly with pencil the distant shoreline first, then added a couple of islands into the lake one further back than the other and added some trees onto both. Lastly, I added an island on the left side of the painting close to the foreground and put in the main pine tree trunks on top of the rocks.

I added another layer of raw sienna into the water just below the sky to darken the reflected colour slightly.

Once that dried I applied a pale wash of alizarin crimson just above it to indicate the rocky shoreline. 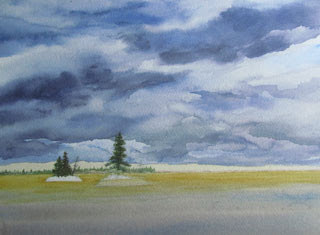 I started with the distant shoreline and put in trees above the rocks across to just beyond the rocks of the second island as I knew some of them would be covered by the trees on both of the island.

With a slightly darker mixture of green I put two pine trees onto the smaller island on the left side first.

To finish the trees on the first island I made a dark colour by adding alizarin crimson to some of the darker green and painted in the dead tree.

Going back to the green from the first island I started putting in the largest pine tree when I was interrupted by unexpected company.

I will post this painting at a later date as I complete more work on the various islands.
Posted by S. Sydney at 12:07 PM No comments: