The eastern shore of Aruba is constantly barraged by the wind and the waves.

The well-known Natural Bridge was created over thousands of years of pounding surf which caused the coral limestone rock to erode. The Bridge was one of the largest formations of its type in the world, having a span of over 100ft (30.5m) and over 25ft (7.6m) high. It was an impressive tourist attraction until its collapse in the early morning hours of 02 September 2005, when the powerful waves finally caused it to become unstable and break apart. 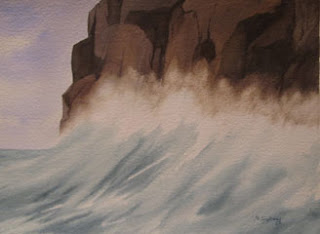 In its place at the same location, just a few feet away, another smaller bridge has formed known as Baby Bridge.

I added the texture to the cliff  and spray from the waves splashing up against the rock face.