Today I was sitting at Art on Kent which is one of the art galleries in Lindsay. 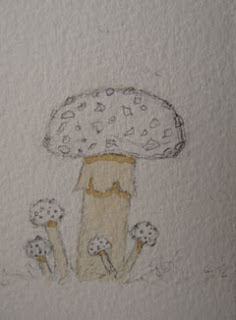 What better way to spend my time at the Gallery on Hallowe'en day than to work on paintings of toadstools that I had started with a class earlier this month (see post on 20 October 2015).

Although we had a number of people come through the Gallery I started by adding the placement of the white scales on all of the toadstools.

On the second painting I thought the single toadstool could use a little company since Fly Agaric (Amanita muscaria) have a symbiotic relationship with the roots of various deciduous and coniferous trees and are found mainly in forested areas growing in groups in all stages of development.

Occasionally they form a naturally occurring ring with one or more trees in the center. These rings are considered to be tethered to the tree and this relationship prevents them from growing too far from the tree roots.

The names come from old European folk tales dating back to the 12th century when people once believed that mushrooms growing in a circle came from supernatural origins and marked the places where fairies, elves, pixies, sorcerers and witches would gather and dance. 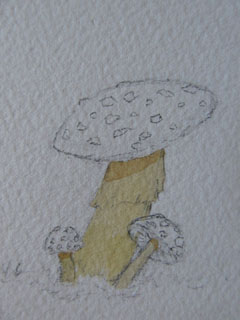 These gatherings usually happened on moonlit nights and the rings would only become visible to people on the following morning in the light of day.

European superstitions routinely warn against entering a fairy ring as they are generally regarded as dangerous places and should be avoided due to the terrible consequences.

And to enter a fairy ring on May Eve or Hallowe'en night was especially hazardous.

While they are most often associated with doom and seen as dangerous places, some legends claim these circles are places of fertility and good fortune. One folk tale states that building a house on a fairy circle will bring prosperity to its owners.

I will post each painting as it is completed.

Thank you for looking at my artwork.
Posted by S. Sydney at 5:49 PM No comments: