On Friday I was at a workshop with Frances Ferdinands and this is one of two mixed media collages featuring wrecks I did using gel media and acrylic paint.

As you drive between French Harbour and Coxen Hole, the Capital of Roatan, which got its name from the pirate John Coxen who lived in Roatan from 1687 to 1697; you will come across Dixon Cove. 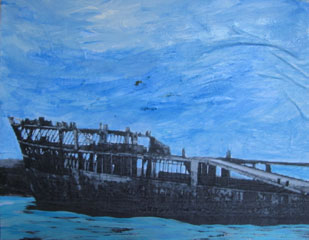 There you will see two ship wrecks visible from shore, their names are supposedly the Tulom & the Alexandria, but so far I haven’t found anything to substantiate that claim other than a mention of the names on a travel website.

Some of the locals I have spoken with claim that the wrecks were two separate incidents and one ship carried lumber and the other carried paint. Both ships caught fire and were abandoned, what remained of their cargos pillaged.

During an attempt to tow the ships out to sea, they broke free and came to rest in Dixon Cove where they have remained since the 1970’s.

This 8" x 10" mixed media painting is of one of the wrecks, which I have seen and photographed many times; when framed will be available for $150.00.

I will post the other beached wreck once it is completed.

Thank you for taking the time to visit my blog and look at the artwork.
Posted by S. Sydney at 9:08 AM No comments: