Today I woke up to a very thick heavy fog; it was so dense that when I went out to do the barn chores I could barely see the outline of the east barn. It was the type of fog that would probably last most of the day and the temperature hovered around 24F (-4.4C).

Once I returned from playing hide and seek in the fog with Kyora I thought I would work on one of the drawings I started a while ago (see post on 14 September 2014), while canoeing on Loon Call Lake.

I started with the background trees and lightly indicated them, followed by adding in a few tops of pine trees here and there to create interest. 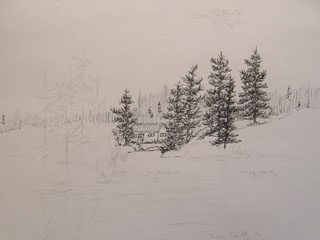 Next I put in the cottage on the island and around the base I added a few grasses and growies.

Around the cottage I started putting in the pine trees until Ron came in and we had to go out and run some errands.

I will post this drawing at a later date once more work on it has been completed.
Posted by S. Sydney at 10:55 PM No comments: