This is another Still Life class that we had at KAGS last month.

There were seven different pairs of shoes and boots on display. I liked three of them that seemed to have a lot of character. 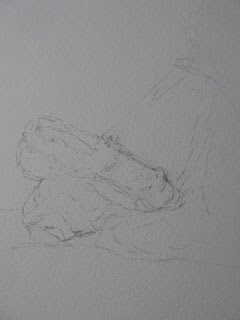 The first one I chose to draw was a pair of well-worn grey moccasins, laid one on top of the other.

A lot of the rabbit fur had been worn away and there were areas where the bare skin was showing.

The soles at the front had worn paper thin and had come away from the bottom of the moccasin.

The next was a pair of well used barn boots and there was no denying that these boots had been used a lot around the farm. 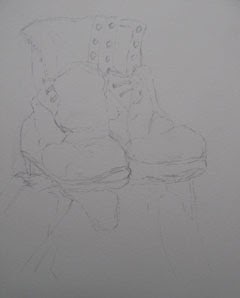 They were scuffed; paint splattered and even still had some parging caked on the toe of one of the boots.

The ragged and bent tongues were hanging out over the laces which were only laced up about halfway and where the sole had separated from the boot there were pieces of hay and straw trapped in between.

The third and final pair of boots was an pair of insulated hiking boots.

The laces and soles showed quite clearly how many miles had been walked over the years. 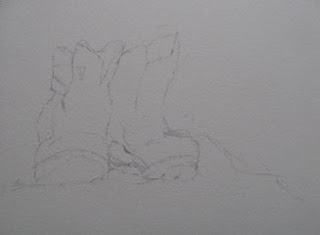 I will post these paintings at a later date once more work on them has been completed.

Thank you for coming to look at my artwork.
Posted by S. Sydney at 7:06 AM No comments: