Autumn Strream 1 - A Work in Progress

I was sorting through a number of small drawings already put onto watercolour paper last month (see post on 15 September 2016) and chose this one on which to work.

I remembered it as an autumn scene and for the background brushed mixes of burnt sienna and raw sienna with vertical strokes in the top two thirds of the paper.

Next using the same two colours with horizontal strokes I put in the water of the stream leaving the area where the rocks would be as white paper. 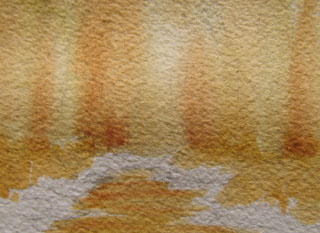 Using the same two colours mixed together I brushed in the ground colour, once again leaving the area along the bank as white paper.

I have decided to rename the painting from River 3 to Autumn Stream 1.

I will post this piece at a later date once I have completed the painting.
Posted by S. Sydney at 9:15 PM No comments: