Frozen Birches - A Work in Progress

Due the heavy snowfall and slippery roads it was decided that the Still Life class at KAGS would be cancelled. 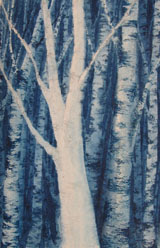 After looking out the window and seeing such beauty around me I went out and took many pictures of the snow laden trees before my fingers and toes got too cold for me to continue to stay outside in the wind and the snow taking more photographs.

Once inside while warming up and enjoying a hot cup of tea I decided that I still wanted to do some painting today and went through a number of pieces on which I have been working.

Since this is a monochrome painting using Antwerp blue I started work on the final tree and washed in some of the shading on the trunk and branches before setting it aside for a while to dry. 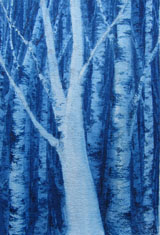 When I returned to it I penciled in the direction of the curves on the trunk and some of the areas that I wanted to put in the birch "whip" markings.

I began painting one of the smaller branches and started with one of the other sections where the branch joins in onto the main trunk.

I will post this painting again at a later date once I have more work on the main tree completed.

Thank you for taking the time to visit my blog and enjoy the artwork. I hope you will return often.
Posted by S. Sydney at 7:12 AM No comments: