Hoturo - A Work in Progress 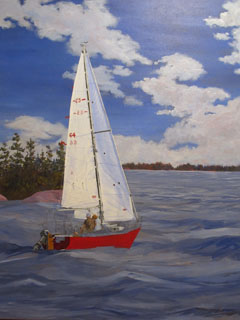 First I blocked in the starboard (right) side of the boat with cadmium red.

As the paint was drying I thought about how I would work in all the fine details to be put in next.

Starting at the stern I painted in the auxiliary motor (a small engine used to power the boat when not under sail).

I used various shades of grey and black; with the manufacturer's name in Cerulean blue and white.

Next I painted in the rudder using a base coat of burnt sienna, then over painting the wood with raw sienna, Hansa yellow and a little bit of alizarin crimson.

The edge on the rudder was washed over with a dark grey as was shadowed area on the tiller.

I wanted to place the figures in the boat and from there work around them painting in the various parts with similar colours.

I started by mixing a flesh tone of white, burnt sienna and a small amount of alizarin crimson and painted in the arms, legs and heads of the passengers. 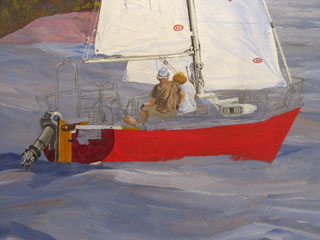 Using mixtures of white, ultramarine blue and a little burnt sienna some of the cabin housing, hat, t-shirt and the gunnel on the stern were painted.

Next using various mixes of Hansa yellow, raw sienna, burnt sienna and white the other t-shirt, shorts and some of the wood on the gunnel and the hair were painted.

With different shades of grey the block and lines were attached to the boom, some of the shadows were put on the cabin housing, the lines coiled on lower part of the mast and the window.

With a pale mix of ultramarine blue and white the shadows of the people and the rigging lines were put onto the lower section of the foresail.

I will post this painting at a later date as more work on the boat is completed.

Thank you for coming to look at my artwork and I hope you will return often.
Posted by S. Sydney at 1:58 PM No comments: