This is the under painting for the second Dixon Cove wreck (see post on 23 April 2012 for the first one). 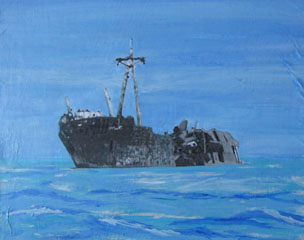 This is the second of two wrecks grounded close together within the confines of Dixon Cove which is located between French Harbour and Coxen Hole.

Stories about the ships abound; some claim one ship, with a cargo of lumber, ran aground in a storm. The second ship came to assist, and also ended up on the reef. The lumber was off-loaded in a futile attempt to save the ship, and was collected by local residents.

I will probably never know the true story about either of these two wrecks, but perhaps the next time I go to Roatan I may find one of the older residents who does know the truth.

I will post this painting at a later date once I have it completed.
Posted by S. Sydney at 6:49 AM No comments: