Today Cindy Allan, Norma MacEachern and I hung our paintings together with those of Vera Penrose who was unable to be there with us at Roland's Steak House, at 845 Highway 7 East, Peterborough, Ontario. 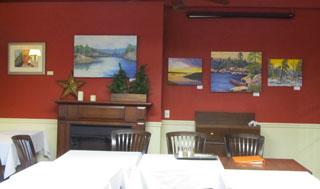 With the four of us being the first set of artists from the KAGS Outdoor Painters' Group going in to hang the show, we were also setting up the way the following exhibits would be displayed. 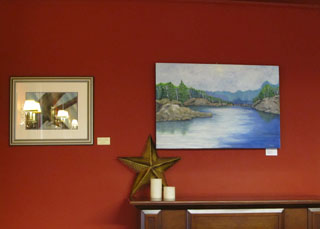 It didn't take us very long to bring the paintings into the room, get them unwrapped and set out so we could decide on the best way to hang them on the walls for a pleasing display. 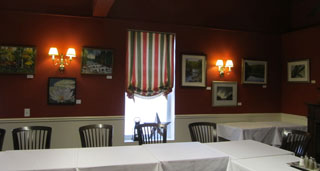 Since Cindy and I had a number of fairly large paintings, we each put one of them out into the hall as main pieces for that wall and would add a couple of smaller pieces from Norma and Vera once the Club Room was hung. 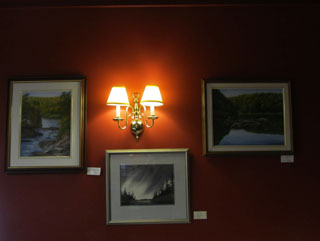 Cindy put one of her larger paintings on each of the 10' (3m) sections of the first short wall while I hung one large painting in the centre of the 20' (6m) wall on the opposite side of the room and my other large painting was hung by itself on the 6' (1.8m) section of the wall by the door on one of the long walls. 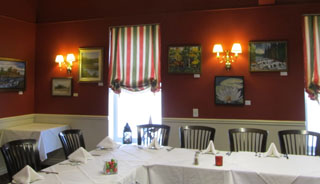 Next we added another of Cindy's paintings to the right side of her larger piece and one of Vera's to the opposite side as all three paintings had the yellow tones in either the sky or the water.

On the other wall we decided that my underwater painting had similar blues to the sky in Cindy's painting and that completed the first short wall. 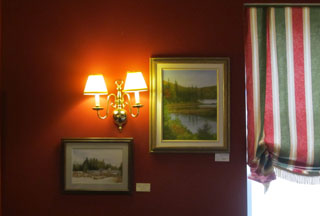 The first long wall had two windows breaking up the wall space into two 8' (2.4m) sections and one 6' (1.8m) section had a few challenges with lights in the centre of each wall.

We decided that each of the two larger wall sections would be able to have three mid-sized paintings and on the shorter wall just two paintings as we didn't want to crowd one into the corner. 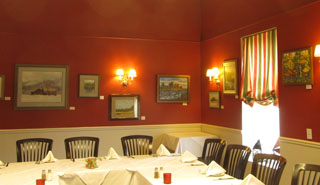 After looking over the paintings we decided to use the ones that had various shades of green as a base and ones with neutral grey tones.

The first section featured two of Vera's paintings with the water and evergreens and beneath the light one of mine in grey tones. 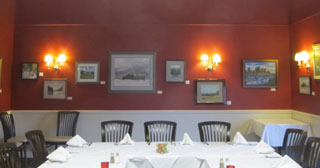 The next section had two of Cindy's paintings one of water and evergreens and the other of a mixed hardwood forest with a few of the maples starting to change colour and beneath the light was a lovely painting by Norma of a water lily. 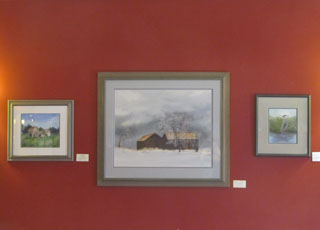 On the smaller wall keeping with the green and neutral theme we hung another of Vera's landscapes and below the light a snow scene of mine with evergreens and a rail fence.

With two of the walls now completed we decided that we would keep the barn paintings together on the short back wall and then gradually fill in the rest of the wall with paintings that matched in colour and size. A larger painting was needed on the one side and we chose one of Vera's landscapes which also brought the green colours across onto the new wall. 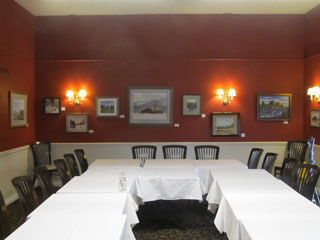 Next Norma's heron was placed between her barn and my larger one as the colours went well together.

Since my larger painting on the last long wall had orange tones in it we thought Norma's winter landscape should go on the short wall near it and my morning lake scene should be below the light which completed the second short wall. 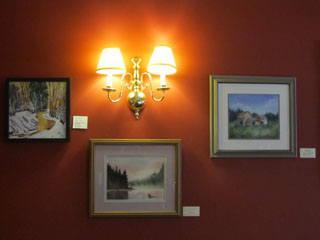 The other long wall was also broken into smaller sections due to a door on each end of the wall and a cabinet, displaying glassware in the centre of the wall between the two doors.

We thought that we would match the sections in the same way as the opposite wall with a painting on either side of the lights and one below. 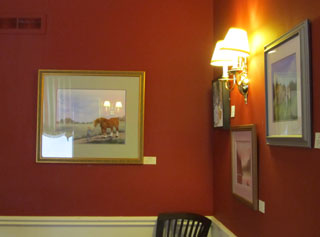 We placed Vera's small painting of a water lily just below the light and a landscape from Norma and one from Cindy on each side of the light.

On the final section of the wall with the cabinet being so close to the light we placed a larger painting of Vera's to one side and a smaller piece of mine below the light. 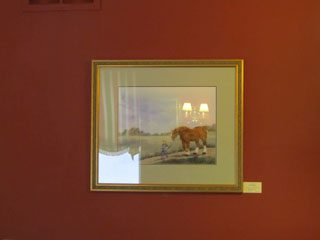 This completed the room with a total of twenty six paintings hanging on the walls.

Now it was time to hang the paintings on the large wall in the hall leading to the dining rooms. 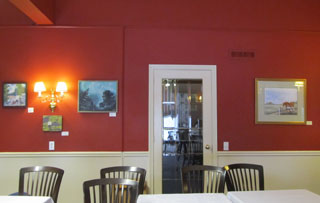 We chose Cindy's large vertical painting of birch trees for the center of the wall and hung paintings to either side. 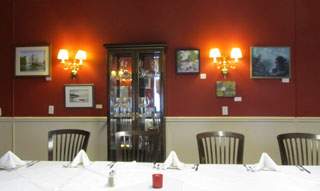 On the other side of the birches we put Norma's painting of leaves and beside that another of Cindy's with a canoe.

We hung a total of thirty two paintings in just over three hours at at Roland's and the owners Brigitte and Peter Brugger were pleased with the display. 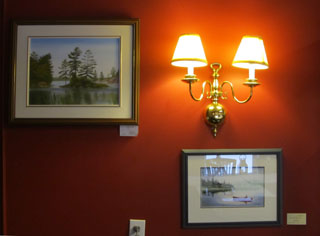 Now that everything was in place, the glass cleaned to remove any fingerprints that were on the glass from hanging them on the walls and our containers were put away in the vehicles, it was time to relax. 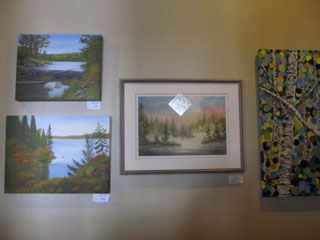 Since it was lunch time, we stayed to enjoy a meal of freshly made soup and a garden salad before heading home.
Posted by S. Sydney at 1:27 PM No comments: