For Ron's birthday gift Christine got tickets to go and see the Monster Jam event in Toronto, Ont. 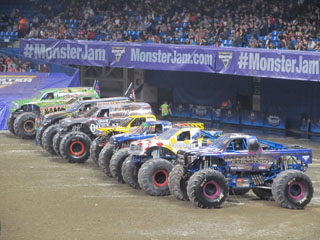 We haven't been to see them since the mid 90's, when we took Christine to see the Monster trucks when they first came to Sky Dome. 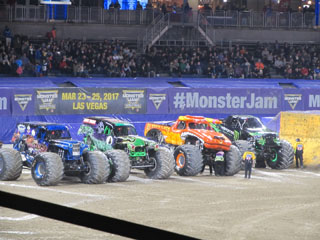 We were amazed at how many things have changed over the years. The most obvious was when we first saw the arena divided in half with two sets of concrete ramps and on one end a vertical ramp for the trucks to do back flips, was unheard of years ago. 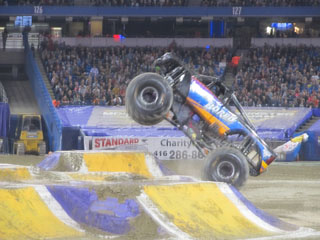 The track itself was flat instead of being hilly and there were a lot less of the cars for the Monster trucks to crush. These changes came about in 2014. 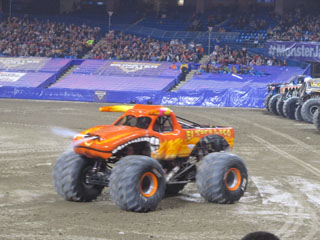 Before there was one huge mound of dirt in the centre of the arena for the trucks to do their aerial maneuvers and with the hilly track they could go airborne during the race and needless to say the Monster Trucks at that time were known for crushing the many cars scattered around the outside edges of the arena. 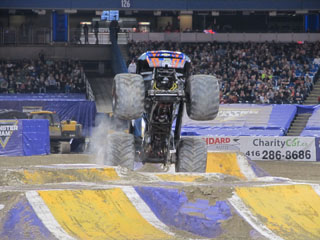 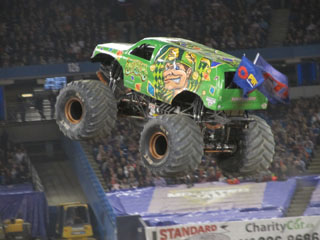 It didn't take long before the next event, the wheelie competition began. The goal in the wheelie competition is to go up a ramp and get as much height in the air while remaining as close to perpendicular to the ground. It was an excellent competition with a couple of the trucks landing on the platform on their back wheels and bouncing back up into the air before landing off the other side of the ramp. 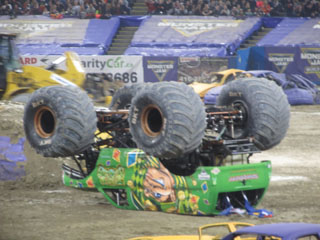 We waited while they set up the Christmas trees and the timers for the next competition which was racing but instead of the usual side-by-side racing each truck started half of the arena away from the other. After two laps the truck with the fastest time moved onto the next round until it was eliminated or won the Championship race. It was an interesting competition with a total of seven heats to determine the winner of the event. 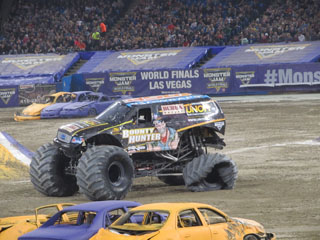 Then it was time for the intermission while the mechanics worked on the Monster Trucks to have all thirteen of them up and running for the final event which was the freestyle competition. 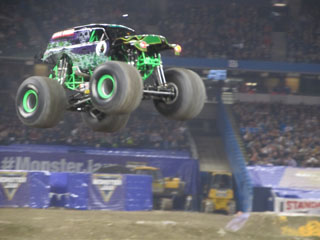 Each driver is given two minutes alone in the arena to show off their skills as they did wheelies, spins, drove their trucks over cars; and did some amazing stunts with their trucks. 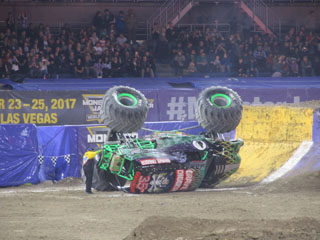 It was unbelievable to see two trucks attempt a back flip, Grave Digger completed the flip, while Son Uva Digger did not quite make the landing and ended up on its side.
Posted by S. Sydney at 6:57 AM No comments: