Today I taught the first of four Tuesday afternoon watercolour classes at KAGS. It was called "Basic Painting".

I wanted my students to learn how mixing one or two colours together could give a wide variety of different colours that would create a different feel to the painting even though they are similar.

Rather than having them be intimidated by having to work on a large blank piece of paper I asked them to work on nothing larger than and 8" x 10" piece of watercolour paper. That way each student would be able to complete at least one painting during the class and would have others to work on at home.

The easiest thing for a class of beginners to work on is a snow scene in a limited palette. For this painting we used French ultramarine blue, burnt sienna and raw sienna.

We wet the paper first and then using pure French ultramarine blue brushed in the sky leaving some areas of white for the clouds and worked down into the snow covered ground to put in the shadows with the blue leaving the rest of the snow white.

Adding a little raw sienna to the blue to make a green, we painted in the distant trees on the far side of the open field. To create the illusion of blowing snow we lifted a few streaks in front of the trees with water. 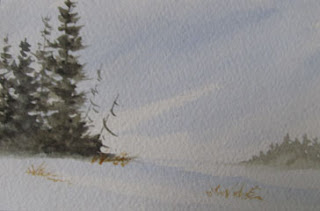 With the light green mixture we marked in the main tree trunks and branches on the closer tress and added the first layer of pine needles.

Next we added a little more raw sienna and a touch of burnt sienna to darken the mixture and painted in the darker closer pine needles onto the foreground trees. A few dead tree trunks were placed among the live trees as well as some bare branches.

Using pure raw sienna a few grasses were painted into the snow at the base of the pine trees and into a few areas on the foreground snow. Then a little burnt sienna was put in among the yellow grasses in a few places and the painting was completed.

We worked on three other combinations of the same three colours and I will post them at a later date.

This original 4" x 6" watercolour painting is available for $30.00 unframed.

If you would like more information about OSWOA please go to my post on 12 March 2010.
Posted by S. Sydney at 7:56 AM No comments: