Today is the second day of a workshop in abstracts with Melanie Browne at KAGS. I thoroughly enjoyed the first day doing the sketch (see yesterday's post) for the image I was going to use for the series of small paintings. 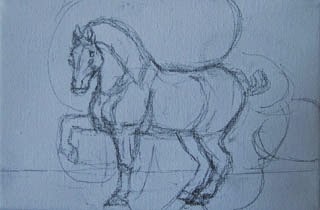 For the first canvas I drew the sculpture fairly realistic and have lines for the background to show movement and to ground the horse. 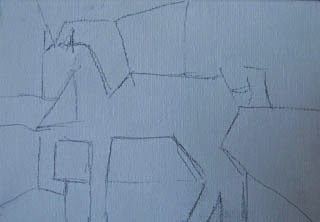 For the second canvas I drew a more stylized horse, concentrating more on the negative space, which will be filled with colour.

For the third canvas I used more of the geometric shapes found within the horse sculpture. It will be interesting to see what colours I finally decide to use for both the horse and the background. 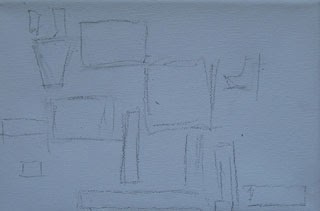 On the fourth canvas I exploded the shapes of the horse using squares and rectangles and it will be on a pale coloured background for a strong contrast. 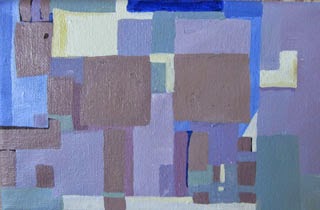 On the first canvas which is similar to the fourth canvas in that the horse shapes are exploded but the background is also made of geometric shapes.

I started by mixing my background colours making the various mauves of blue and red with touches of white and black, then the greens of blue, yellow adding white and a tiny amount of black. These colours were used throughout the painting creating an interesting pattern.

In a few areas I used pure French ultramarine blue as well as mixing white and a small amount of black or red for variation.

Next I added a little more yellow into the green and a lot of white for a pale yellow green and painted in the mane and tail as well as a few areas to create movement throughout the painting.

I under painted the horse shapes with a mix of black and red for a warm colour, then to lighten I added yellow and a bit of blue and went over them leaving a few areas of the black mix to show.

It still needs a little more work before it is completed and I will post each of these paintings at a later date as more work on them is completed.
Posted by S. Sydney at 11:41 PM No comments: