The Lady's Slipper gets its name from the shape of its petals, which resembles a woman's shoe. It is also known in the USA as the moccasin flower.

The Cypripedium genus has over 40 Orchid species that are native to North America and can be found across much of continent in dry or moist forests, usually found under Oak, Red Maple or Pine trees. They bloom from late spring through early summer and should not be picked or transplanted, as they will rarely survive a change of habitat. 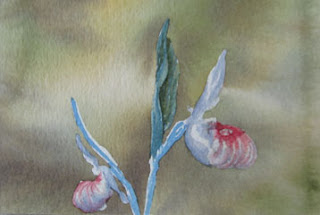 The one shown here is the Showy Lady's Slipper which was considered Minnesota's state flower as far back as 1893, long before it was officially passed into law. In 1902 the Senate passed a resolution on 18 February 1902, naming the pink and white Lady Slipper (Cypripedium reginae), as Minnesota’s state flower.

I will post this painting at a later date once it has been completed.
Posted by S. Sydney at 4:00 PM No comments: