Trilliums - A Work in Progress

This is the first in a series of the Provincial Flowers of Canada.

The Trillium (Trilliium grandiflorum) was chosen as the provincial flower for Ontario in 1937. It is an official symbol of the Government of Ontario and is often used in heraldry in Canada. It also serves as the official wild flower for the state of Ohio.

These charming native woodland wildflowers are a harbinger of spring. 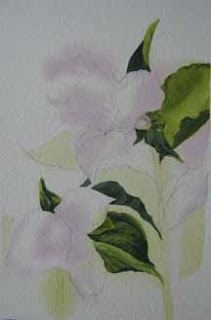 They start flowering for two to three weeks beginning in late April to mid May depending on local conditions.

The plant is most commonly found growing in rich deciduous or mixed upland temperate forests of eastern North America.

They're from southern Ontario, Canada in the north, east across to Nova Scotia, and south into the USA to the northernmost part of Georgia and west to Minnesota.

The simple elegance of these delightfully unusual single stemmed flowers, have a whorl of three leaves and single, large 2" - 4" (5cm - 10cm) three petal flower with slightly ruffled edges. They are white when they first bloom and often turn pink with age, making them one of the best-known and easily recognized wildflower.

I will post this painting at a later date when it is completed.
Posted by S. Sydney at 7:40 AM No comments: