Tonight we are setting up the grids for the 25th Annual Shades of Summer Art Show and Sale held at St. Matthews Church in Buckhorn, Ontario. 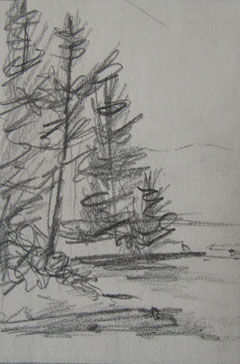 I arrived early and decided to walk along the shoreline and do a few sketches of the lake around Buckhorn Lock 31 which divides Upper and Lower Buckhorn Lake.

I plan to develop these sketches into paintings and complete them during the nine days of the art show where I traditionally set up my small drafting table at the back of the Church and can be found painting there daily.

Upper Buckhorn, Pigeon and Chemong Lake, make up what is known as a tri lake system of three lakes connected by narrow waterways. 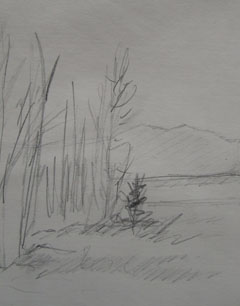 While we have never gone through any of the Locks in the boat, we have spent all day out on the tri lakes.

Starting from the public launch in Ennismore going down to the bottom of Chemong Lake before going back up to pass under the Causeway linking Ennismore and Bridgenorth before going through the Harrington Narrows.

From there we passed on the east side of Fox Island and continued through Upper Buckhorn Lake until we reached Buckhorn Lock 31 where we tied the boat and stopped at Mainstreet Landing for lunch on their patio overlooking the Lock and enjoyed watching the boat traffic as we ate our meal. 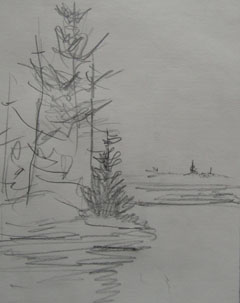 Lock 31 of the Trent Severn Waterway is one of the busiest locks in the waterway, having between 5,000 to 8,000 boats annually going through them during the boating season.

The Locks open on the Friday of the Victoria Day weekend in May and remain open until Thanksgiving Monday in October.

After lunch we headed back down Upper Buckhorn Lake which is the second deepest of the tri lakes with a maximum depth of 47' (14.3m) and passed through Gannons Narrows into Pigeon Lake where we went partway down the lake before stopping for a while so Ron could go fishing while I would sketch and take reference photographs. 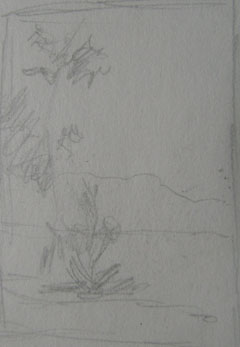 Ron prefers to fish until he lands at least one of the major fish species which in all of the tri lakes include black crappie, carp, large mouth and small mouth bass, muskie, perch, walleye, bluegill and pumpkinseed sunfish.

It doesn't matter how large or small the fish he catches is because all are live released back into the lake before we turn around and head back up the lake.

We go back through Gannons Narrows into the lower end of Upper Buckhorn Lake and go down the west side of Fox Island taking the trek through the islands to Harrington Narrows and back into Chemong Lake to return to our launch site in Ennismore where after loading the boat back onto the trailer it is time to have supper at the Sip and Dip Restaurant in Ennismore. It is nice to be able to spend an entire day out on the these three lakes which provide large bodies of open water for boating, sailing and other recreations without being unrestricted by having to pass through the Locks.

I am fortunate to live such a short distance away from the lakes and be able to enjoy all they have to offer.

Thank you for looking at my artwork.
Posted by S. Sydney at 10:44 AM No comments: