At this time of the year we often have fog overnight or in the early morning when the sun rises, especially in the low lying areas or on the water. 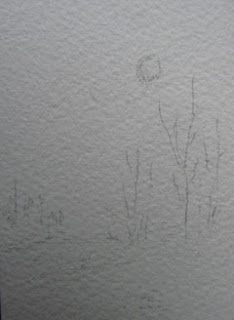 Accompanied by She-Ra as I took my usual morning walk, I headed down toward the Snelgrove Brook at the east end of the property.

The sun was up and trying to peek through the fog that covered most of the bottom fields and hid the far hills from sight.

When I arrived at the edge of the brook the sun was reflected in an area of open water.

All that could be seen were the closer bull rushes and a few of the trees on the far shore appeared eerily as the fog moved across the water and then disappeared. 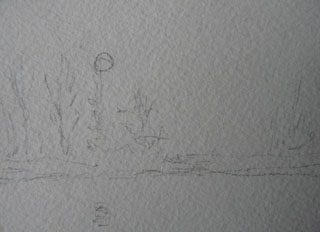 I took a couple of photographs to capture the essence of the scene before taking out my sketchbook and drew what I saw in these two sketches before I started back home to get started on the barn chores.

Thank you for taking the time to visit my blog and look at the artwork. I hope you will return often.
Posted by S. Sydney at 5:47 PM No comments: