I came across some photographs in the family album of when I was nine years old on a family vacation near Parry Sound, Ontario.

The log cottage we in stayed at was located on Georgia Bay and right across from the small inlet in front of the cottage was an island that we would swim over to during the day and explore.

The four of us would often go out on the Bay in the small motor boat to go fishing. 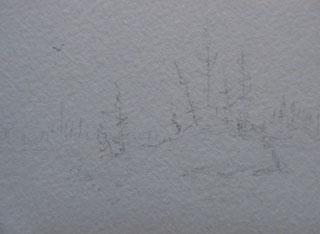 My Mom caught a Northern Pike that was slightly less than 40" (1 metre) long and it broke the small weight scale we had so I do not know what it weighted, but it was large enough to give us more than one meal.

I did this little sketch of the island and I may do a few more of them at a later date.
Posted by S. Sydney at 6:11 AM