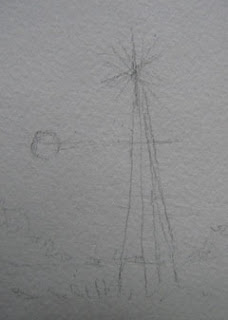 Today was very busy day for me as first thing this morning I had to go to the Visitors' Centre in Algonquin Provincial Park to tear down the Nature's Palette show.

I then returned to Peterborough and picked up my painting at the Canadian Canoe Museum from the Peterborough in Portrait: Our Inclusive Community exhibit and fortunately I had an extra box as they threw the out. 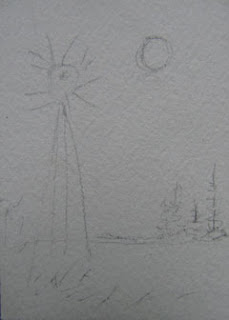 Even though I did a lot of running around today I also took the time to do a few quick sketches along the way to and from Algonquin Provincial Park.

Since the sun was coming up as I went past a farm that had a windmill silhouetted against the sky, I had to turn around and go back to do a quick sketch of the windmill standing alone in the field which, at a later date I make into a painting. 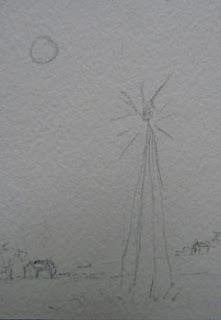 Further along the way I came across another windmill in the field and the sun was much higher in the sky which changed the lighting on the windmill.

Once again I stopped and did another sketch of that windmill and took a number of photographs before continuing on my way.

On my way to Peterborough I came across a third windmill and did another sketch.

Perhaps I will use these sketches to create the four seasons with windmills, or various times of day, who knows what I will do, but at least I will have captured a part of the past that is rapidly disappearing.
Posted by S. Sydney at 5:10 PM